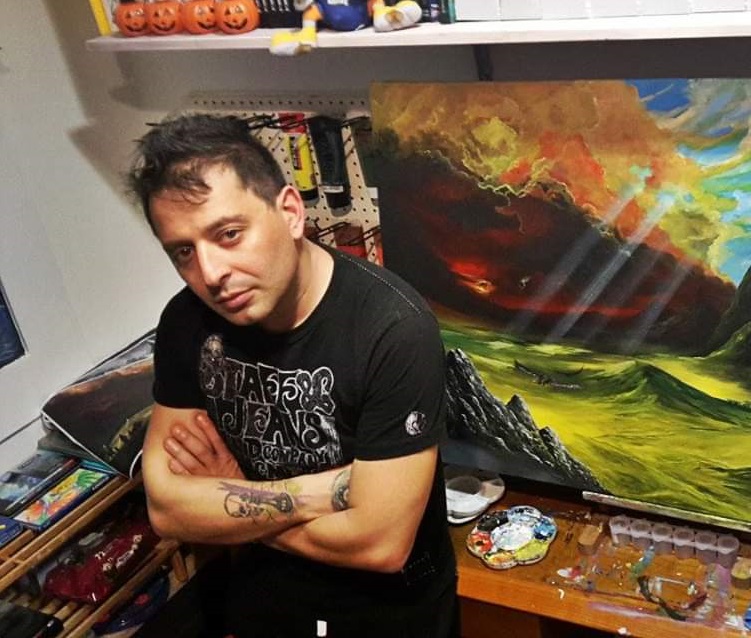 Spiros Gelekas is a professional painter-artist, member of Corfu Art Gallery, Member of The International Artists Exchange Association (IAE) exclusively represented by MO2art (micro-oxygenated art) in China.  Specializing in fantasy art, modern art and abstract. He was born and raised in Corfu, Greece where he lives until today.  ​

Spiros began his career as an interior designer, and took early painting classes under renowned Corfiot artist Spiros Alamanos in 1987. After nearly 15 years as a professional interior designer for commercial establishments and private homes, he decided to focus exclusively on art, with a series of exhibitions in Greece and abroad that brought him instant recognition  His development as an artist began in his early childhood. His first stimuli were the comics and especially “The Thundercats” and Marvel’s heroes. He started by copying the drawings of the stories he read and he continued with composing and illustrating his own narrations using the same heroes. His first essential contact with the art of painting occurs in 1998.

He will experiment mainly with classical themes, representation-copying the reality, landscape composition using classical technique. As time passes by, his human evolution will be determined by the 90’s books, fantastic literature, with typical examples of the Lord of the Rings and Silmarillion, Science Fiction movies such as Star Wars, Lord of the rings, and rock music, mainly Rock Operas and Progressive Rock. All these together, compose his artistic amalgam which makes him able to produce his purely personal art. Writers who contributed decisively to his way of thinking and expressing himself are Alan Poe, Tom Robbins, Carlos Castaneda, Umberto Eco and the biggest influence John Ronald Reuel Tolkien in the place of the most important.  ​  Except from his personal human completion, through his art – his personal way to express his thoughts to the world – he aim at offering an aesthetic satisfaction, daydreaming, opening mind and parallel our physical and mental eyes. He aims at the creation of a world that will extend beyond our own one, which is visual and conceptual finite.

The driving force in his art is his personal journey for the creation of a new fantasy world. It’s like composing another type of “fairy tale”. A “fairy tale” that is not something fake but a different aspect of our physical-material world. A fantasy world from his point of view.  ​  He studies and embraces the artistic movements of surrealism and realism, fully aware of the fact that the former feeds of the soul of the latter and vice versa. Through his art, he seeks their union, aiming to a comprehensive “explosion” of emotional and mental pleasure  Anxiety, joy and ecstasy are the three words which describes what he feels every time he sees an empty canvas. A ritual followed gently by preparing the canvas, the colors, the brushes. The smell from the fresh box-canvas is a real pleasure. He usually starts directly with a brush or knife, depending on the technique. Rarely does make a draft. He has studied in his mind every movement, each line and each color. Sometimes he cannot make it so easy and I get anxious until he has the result in every detail, as he has imagined. But in the end, the result justifies him. A creation happened again, he’s thinking timidly in the back of his mind. Another step towards to immortality. But he does not speak for it with people. Sometimes he wants to go back to the time of the process, to do it again. No easy to describe the enjoyment of every moment that passes and gone. He feels nostalgic every time a project ends and maybe a bitter joy.

He separates a piece of himself, which is ready to travel out to the world.  ​  Principal inspiration – Artists are Salvador Dali and Roger Dean. Salvador Dali gives realism within the sphere of surrealism and Roger Dean uses a supreme technique for the creation of a world which is similar to his.  ​  Strongly influenced by surrealism and fantasy art, Gelekas presented his first solo exhibition, “Fantasy Landscapes,” in the foyer of the Municipal Theatre of Corfu in 2016. Between 2017-2019 he completed a large volume of work and exhibited in China, with his works hanging alongside originals by Dali and Picasso. In 2018 he held the solo exhibition was “Imaginations through a Painted Canvas (Oct-Nov 2018) in the Corfu Art Gallery; followed by the charity drive “Art brings Smiles” at The Attic Gallery in early 2019.  The same year he began his participation in Fantasmagoria in Thessaloniki as well as the representation of Greece in the framework of Montenegrin chairmanship over Adriatic-Ionian Initiative, International Art Colony, with the participation of one representative of each member state of Adriatic-Ionian Region.  ​  At the initiative of the painter he meets for the first time in Greece the mythical universe of J. R. R. Tolkien, author of “Lord of the Rings” of “The Hobbit” and Silmarillon. An exhibition-tribute to Professor Tolkien and the Middle-earth under the auspices of the Greek Association of Tolkien Friends – The Prancing Pony, in collaboration with the Association of FantastiCon, the Hellenic American Union and the Hellenic American College (HAEC). The exhibition has been very successful in Thessaloniki, Athens, Larissa and Thebes as it will continue in other cities of Greece and Europe with scheduled individual appearances for 2019-2021.  ​  At the same time working on the cover of the new book on echoes of ancient Greek literature in Tolkien’s work translating previous scholarship into Modern Greek for the first time.  ​

In the year 2020 the data for the whole world changed due to covid-19. Nevertheless, the artist remained active even though the planned European tour was postponed. He donated two paintings to the General Hospital of Corfu, took over as an art consultant at Domes Miramare on behalf of Loudos Fine Art and Auctions, as well as master classes at the same company.

Τhe constant and continuous, in the last semester, his presentation on pages that officially deal with the Professor, his presentation by www.tolkienguide.com (next to the official artists) and the selection of a series of his works for banners of many Tolkien groups and a sharp increase in sales of related works, especially from the USA.  He became a the first Corfiot/Greek artist of “Tolkien” to be included in the annual art book, “Art Freaks Global”.  ​  In 2021 he donated a painting to the Blood Donation Department of Corfu General Hospital.

As for his Tolkien adventures, continued with a Tribute from the Russian Tolkien Meetings, his selection for the prize for the Fresno Country Public Library of America for the “Fellowship of the Ring” Marathon,  joined the list of Tolkien Temple as a Tolkien Artist and the book “Echoes of Ancient Greek Literature in JRR Tolkien’s Work” is published and he presented the original artwork and book “Echoes of Ancient Greek Literature” at the Municipal Theater of Corfu, with Dimitris Kolovos, celebrates his five years as an artist.  ​